Shiseido announced the medium- to long-term strategy “VISION 2020” in December 2014 and started the makeovers of all areas including strengthening its brand, marketing, expanding R&D investment, and organizational/human resource systems.

However, we all feel hesitant when we are asked to change.  Mr. Aoki believes the realization of such makeover depends on whether “employees’ spirits can be ignited.”

Thus, now Shiseido has been asking all management executives, as a matter of the highest priority, for their leadership which “ignites spirits” of their teams or subordinates and revamping the human resource development starting with senior managements to realize such leadership.

“VISION 2020” Aims To Regain The Original Stance of Shiseido

Kashima: I think “VISION 2020” which Shiseido announced in 2014 is a revolutionary change to review how the entire group of Shiseido should be.  Would you please tell us what this change aims at?

Aoki: “VISION 2020” aims to regain the original stance of Shiseido.  It does not mean aiming at some sort of position, for example, establishing the position of the world’s leading companies, in 2020.
Shiseido was ranked as the world’s fifth Cosmetic manufacturer in 2015, but it was the result of successive management executives’ “foresights,” rather than an aimed result.  Shiseido started overseas businesses earlier on and established the first sales base in Taiwan in 1957.  In establishing a subsidiary company which conducts planning, developing, and sales of fragrances in France, the home of fragrances, Shiseido did business in French way.  This is what Japanese companies have been pointed out to be insufficient for globalization nowadays.
Shiseido began as the first western-style pharmacy in Japan and has been stunning people by highlighting healthy tanned skin in advertising or starting men’s cosmetic products.  Without such dares, it would not survive for 145 years.  Shiseido is not a company preserving its 145-year legacy, but a company possessing the ability to reform itself constantly within the changes in the environment surrounding it.  Therefore, it has been survived.
These past few years, however, Shiseido seemed to lose sight of their own path.  The domestic share was steadily declining, and the budgets for R&D and marketing were decreasing.  The general reputation indicates that people think Shiseido is reliable but not dynamic.
Facing up to this reality, Shiseido should regain its authentic strength to be a company which shines for next 50 years, or 100 years.  ”Be active, Shiseido,” is the main theme of  “VISION 2020.”
We pursue Shiseido to be a company full of energy that young people of all over the world dream to join, a company which leads in the field of innovation where the entire Japanese business has been losing confidence, or rather a company that would make people proud to say “That’s our Shiseido!”
Thus, we have been building out all activities from customer’s perspective, working on projects that incorporate marketing and innovation elements, and developing human resources and organizations for supporting such activities/projects.

Kashima: I felt keenly the passion behind, and it gave me goose bumps.

Aoki: We draw up a short-term numerical target because we of course have accountability for stakeholders.  But the currently conducting organizational reform and educational reform simply aim to arrange the shape of the company in order to allow Shiseido to demonstrate its authentic strength in current environment.  We are not trying to change Shiseido into a different company.

The Key is Whether Employees’ “Spirits Can Be Ignited”

Kashima: What do you think the key is to make the efforts successful? 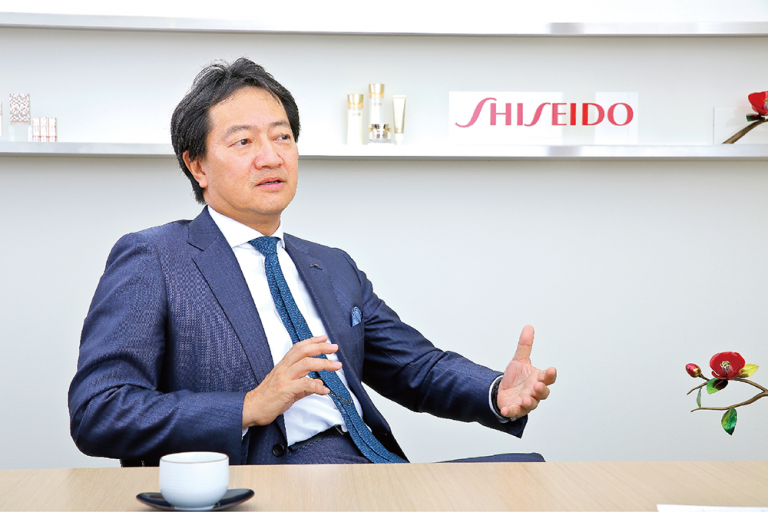 Aoki: The business of Shiseido has had excellent systems and has been expanding by pervading the systems and rules to every corner of the company. However, this could lead to an atmosphere of “everything is OK, as long as it follows the rules.” It is easy to play by the rules. However, it takes discretion away from each employee and eventually makes them stop using their abilities to think. Actions of us should be not “driven by rules” but “driven by principles.”  I believe that a company has the ki (vital force that operates the body) circulates through it just like all forms of life. This circulating “ki” matters ultimately how much efforts can be made, or how much results can be achieved.  When you have 10 people and each of them has a certain technical capability, can the sum of such capabilities be demonstrated accordingly? No, it does not actually work that way. When you work in a group, there is always a certain number of people who play truant from work. On the other hand, if their spirits get fired up, they could demonstrate the power of many times more, just like Kajiba-no-Bakadikara (hidden power exercised in emergency situation such as a fire). Shiseido needs such dynamic power now.  Our CEO, Uotani expressed it by the word “ignite (*1).

Kashima: In a sense it is a holistic (*2) perspective, and I loved it. How did leaders in the company react?

Aoki: Of course, a holistic story would not be enough for them to understand our intention. For a company and organization, it would be “regaining” what has been forgotten, but for many of current employees, it would be something they never have experienced. We need to educate them.  We have been trying to increase communication by various means including setting out the principles of action for employees called “BIG WIN 5” and the keyword “Try & Error & Try,” holding a workshop for sales leaders, and changing how people work or how we run meetings.  We also have been working thoroughly on the systems such as a reward system, an objectives management system, and a promotion to improve them so that what they will be rewarded by those systems will be consistent with what we ask for our employees.  In order to make employees fully understand our intention and what we are going to do, I believe we need to boost up the skill of training human resource itself

Kashima: Could you tell us about specific measures you have been taking for the training?

Aoki: We started from the corporate officers.
Previously, it was considered important that potential management human resources had a sense of ethics, were well-educated, as the leaders at the top of an organization, and had management perspectives. These qualities are of course important, but now we consider it most important if they can inspire their subordinates and teams.  Corporate officers should have possessed such qualities, but we the current corporate officers still need so much efforts, therefore we first made assessments on 100 people including corporate officers and their heirs.  We conducted online surveys, interviews by external professionals, and 360-degree assessments in their sections. And, feedbacks on team cultures and leadership styles are given to each individual and their supervisors. It all starts from corporate officers and executives becoming conscious that they are inadequate in so many ways.

Kashima: I think it is amazing that you took actions in accordance with the principle of “starting from people at the top of an organization.” Recently, some started feel less hesitant, however, I think there are still many companies feeling quite challenged to conduct such measures on corporate officers.

Aoki: I have been told something similar quite often. Indeed, there are still many companies considering the position of corporate officer as “agari (end of a game),” but that is wrong. Person in such position must challenge the missions that have a higher degree of difficulty. That is what a corporate officer is supposed to be about.  Nevertheless, in the case of Shiseido, Uotani said “I will take the assessment” and took a lead off, so we could get other corporate officers involved to start the assessment. Uotani and I took two different assessments including a pilot version. Some comments are severe, and I felt mortified. But Uotani always says “Serving as CEO of Shiseido provides a growth opportunity for me.” I had a great deal of empathy for him. I genuinely agreed with him with the feeling of “I believe what he believes.” Subsequently, we created a global common educational system called “Leadership Academy” and started to offer the programs.  In the “Leadership Academy,” we have prepared a program with four levels. When it comes to changing oneself, everyone has a psychological bottleneck, and such bottleneck varies by the individual. In the three levels of the program, namely “ELP,” “SLP Advanced” and “SLP Basic,” we emphasize knowing and removing each individual’s bottleneck. For employees working for more than three years and managers without subordinates, we did not have much measures to develop their leaderships, however, they can raise their hands to participate in the program called “Future Leader Program” where they take assessments similar to those conducted in the Leadership Academy and receive feedbacks. Depending on the results, there will be opportunities such as going on an overseas MBA program, MOT program, or short-term MBA program. We expand opportunities for those who wants to improve themselves (see Figure). 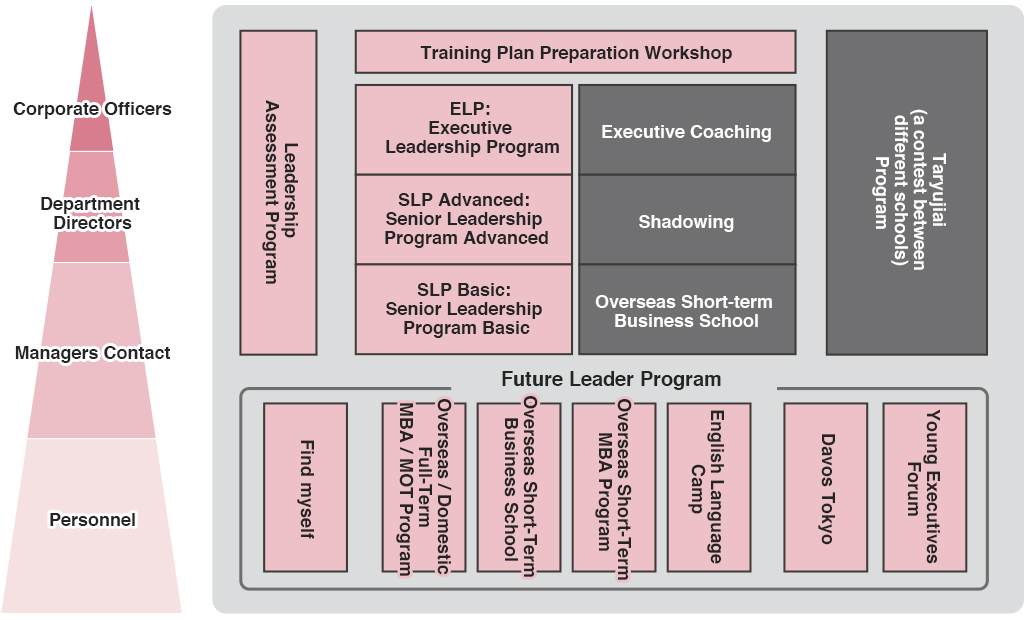 Kashima: I see various educational program have been prepared. How do you measure the effects?

Aoki: Since this is a high-budget project, we certainly need to measure the effects. However, we do not think we should assess the increase of certain points from the set KPI as “OK,” or the plateau as “No Good.” I believe the important thing for us is that the target of becoming a company that young people of all over the world dream to join can be achieved in mid-term.

HR’s Role is to Create “Opportunities” Through Systems and Structures

Kashima: believe HR would have a major role to play in achieving such target. What vision do you have for HR?

Aoki: I think many people generally tend to have the impression that HR is a little cold or feel a psychological distance from employees of other departments, because HR controls a human resource system or manages information which cannot be disclosed.

I have been telling members of the HR department to be more “Touch people.” Actually, I am a former architect and I believe that what HR does is similar to what an architect does.

Architects draw a plan for making pillars, walls, ceilings, and floors when building a room. However, what they have in mind is not a pillar or a wall itself, but the space created with those pillars and walls – whether it is modern, warm, or inspirational – in other words, they picture what the space would bring to people who come in.
HR is a department making use of measures and systems such as recruitment, training, allocation, and assessment to create the “space/opportunity” called a company and thereby realizing what such space/opportunity brings to people who come in. 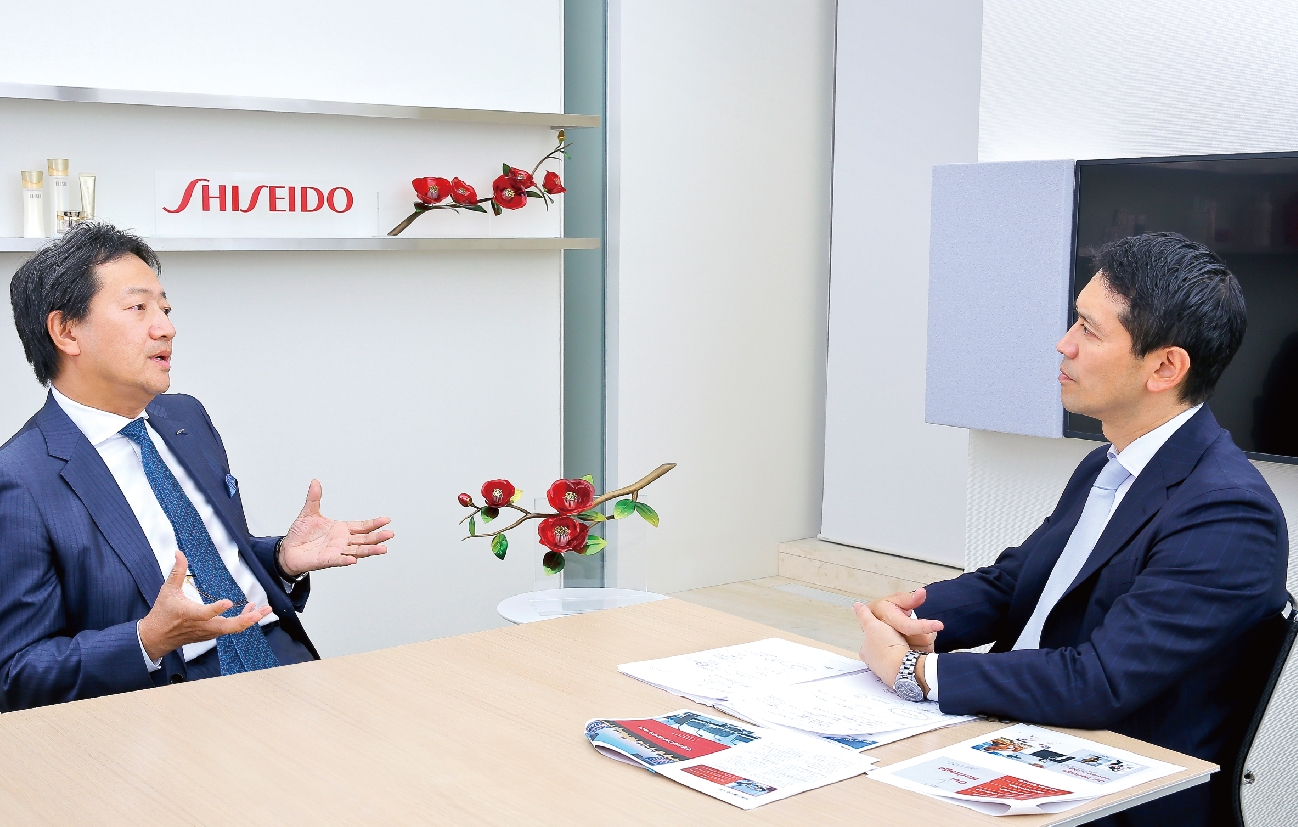 However, I think many companies still have the HR systems which worked well during the period of high economic growth… recruiting newly graduates, training them as generalist rather than sharpening up their expertise, instilling unwritten rules or orders in their minds and thereby coloring them deeply in a company. Our work should not be aimed at maintaining/managing the structures or systems.
What skills are necessary to lead the medium- to long-term of the company?
What should we do to secure such human resources? We must start thinking based on what company we aim to be.

Kashima: Probably, now Shiseido has been reviewing the OS of HR management.

Aoki: You may be right. We have been taking various measures, but there are still so much to improve. We sometimes backslide just like taking three steps forward and two steps back. Even so, I feel a response that we have been making an overall progress. A friend of mine said “If it is hard to move forward, you are going uphill,” I think it is true. We do not make any progress when we feel things are going easy, we are rather going downhill. I have been trying to see things that way.

Kashima: I felt my spirit emerge listening to you. Thank you very much for sparing us your time today.

*Affiliations, titles and contents are as of the day of interview.